The Fellsman is in 9 days. At some point during the 20 hours thereafter I may well die.

This race was one of the first on my list to do when I ventured, innocently, into the world of ultras. Gazing around me in wonder, I heard about a notorious race across the Yorkshire Dales that only the most hardy consider and thought YES! I’ll do that. Sounds nice.

Travel forward in time and experience, to when Chris Randall asked if I fancied running it with him and Dan Thompson. Good mates that I’d ended up finishing SDW50 with last year (or, more accurately, they found me wandering on the trail and dragged my sorry arse home).

I considered and decided it would be a good training run for Lavaredo. How so, I hear you say. Well, they might be very different terrains but in terms of elevation, difficulty underfoot and time on feet, the Fellsman should set me up well. In fact I’m rather hoping after the bog hopping slog of Fellsman, Lavaredo will be a joy by comparison.

I’ve only started really focusing on the Fellsman since Hardmoors. And it’s only really been in the last few weeks as the lads and I discuss and prepare for the race, that I realise how hard it’s going to be.

It might “only” be just over 60 miles, but it has 11,000ft of elevation as it climbs some iconic hills in the Yorkshire Dales and, of course, there are the moors.

I know exactly why the American lads were warned “don’t stray off the path” in the film American Werewolf in London and it had nothing to do with werewolves.

I am starting to suspect the terrain may well be very similar to that of the Trotternish Ridge of Skye. And one where my friend Emma advised me to embrace and learn to love the 30 minute mile. Dear god. Some of you may remember Skye nearly killed me. The Fellsman definitely has the potential to finish me off.

However, I have added a new weapon to my arsenal. Poles. Yes. I have actually bought poles. And I like them. And the more I research the race the more I believe they may actually save me. And save my back.

I have enjoyed going over the map and plotting the route.  There are some major changes to this year’s race and there’s nothing more I love doing than pouring over a map, trying to visualise the terrain.

Although technically you must navigate yourself from checkpoint to checkpoint, there are only a certain number of ways one can go from A to B via bog so there are gpx files available and comparing those to the notes from the Race, and a bit of healthy competitiveness between me and Chris over who plots the best route (obviously me) and I’m pretty confident we won’t get lost*.

I even ordered my own custom OS map so that I could get the whole route on one map instead of two.

Putting all my gear together has been interesting. The mandatory kit list is long. 5 long sleeve tops!! An emergency foil poncho hoodie as well as a bivvy bag?! 3 pairs of trousers?!

And somewhere it is advised a 16l -20l pack is optimal. After putting everything together in a ridiculously huge pile, I realised my largest race vest is 12l. Damn.

I have an 18l Osprey pack which I use for day trips and walks with C. That will have to do. It’s nothing like a race vest however; no pockets at the front. I’ve bought some bungee cord to make up loops for the poles.

I took it out for a run for the first time the other day. Holy shit it was heavy and bulky. 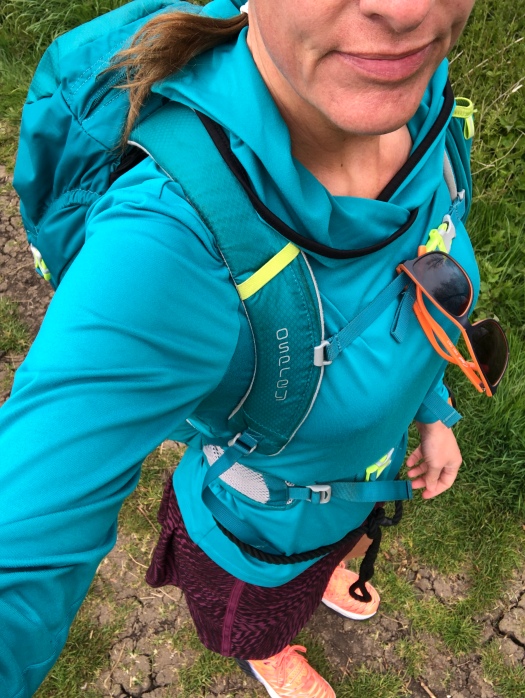 Those poles really do have their work cut out.

So, if you never hear from me again after next Saturday you’ll know why. I’ll have stepped onto the moor and immediately sunk into it without trace.

*Disclaimer; written after 2 glasses of wine so ridiculously optimistic at the time of writing

Running in the Peak District

What I write when I’m not out running

This is starting to get out of hand!